Does The Haunting Of Bly Manor Bury Its Gays?​ 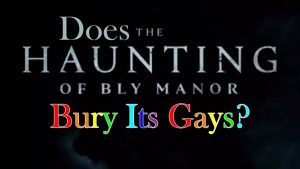 I watched the Haunting of Bly Manor and I have some feelings about it. Does it bury its gays? Let’s find out.

If you haven’t watched it yet, I do recommend it. It’s a vintage horror set in the English countryside in the late 1980’s, which, if you’re a millennial like me, doesn’t SEEM vintage, but this movie is mostly set before I was born, so I’d say it counts.

It was created by Mike Flanagan for Netflix and it very recently released on the platform. It’s based off the 1898 novella The Turn of the Screw by Henry James, but has obviously been updated to fit into the 1980s.

There will be some spoilers for Bly Manor, because I can’t really discuss the gays or the potential burying of them without spoiling. If you haven’t yet watched The Haunting of Bly Manor yet, I encourage you to do so and come back. If you’re a total baby about horror, like me, also be sure to check out my blog post and video with tips for how to watch horror if you hate being scared.

So, let’s start off with the gays in question.

Our lead character is Danielle Clayton, known in the show as Dani. Although Dani’s sexuality is not named, I’m leaning towards her being a lesbian given the onset of panic attacks the closer she got to her wedding with her male partner.

Our other gay is Jamie, the groundskeeper at Bly. Her sexuality is also not named, so we just know that she’s a queer woman. 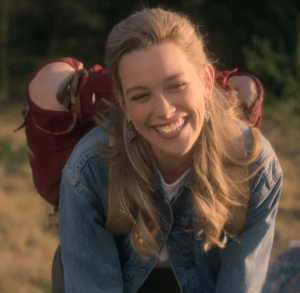 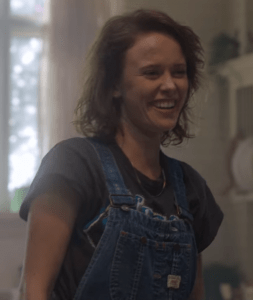 Now that we’ve met our romantic leads, lets talk about the romance. I can’t say that I had many expectations for a romance within a horror movie, but I actually don’t have too many complaints.

The romance in Bly is very slow to get started, which is to be expected. Prior to the start of the series Dani suffers a massive personal loss and comes to Bly still in the depths of her grief. Jamie has been working at Bly for some time and has a difficult time connecting with people because of her family and the negative events of her past associated with them.

Things start to kick off in episode 4 when Dani finally has a chance to properly process the loss of her fiance and the two characters kiss. Much of the series is quite understandably focused on the hauntings and there’s not much for relationship progression until the final episode where it slams on the gas and shows us, in the quiet aftermath, how they are together and the years they spend in love afterwards.

So, does Bly bury its gays? Maybe.

According to The Take, a YouTube channel I’ll link below, female queer characters are much more likely to be killed off in the modern day with 42 lesbian and bisexual characters killed off various TV shows in a single year. Part of the massive issue with numbers like this is the fact that there are so few queer characters to begin with.

The Bury Your Gays Trope Explained

Now we’re getting into some heavier spoilers, so if you don’t want to have the ending spoiled, you’ve been warned.

Let’s work through the aspects of bury your gays.

In terms of numbers, how does it end up?

I’m not certain how many characters to include in this general count so we’ll say that there are 9 leads in the story – Dani, Jamie, Peter, Hannah, Owen, Rebecca, Flora, Miles, and Henry. There are also several recurring characters that I’m dubbing important enough to be counted because of the number of appearances or their effect on the plot, as long as they have a name, which will add Eddie, Viola, Perdita, Arthur, Isabel, Charlotte, and Dominic to our count, bringing us up to 16.

We know that two of those characters are queer, one of whom dies. Of the non-queer characters only Flora, Miles, Owen and Henry are alive at the very end of the story. Arthur and Isabel are debatable since they aren’t killed off, but they’re still dead when we start the story. Henry is also debatable since he does technically die, but doesn’t stay dead. So that leaves us with 8-11 non-queer deaths by the end of the story, depending on how you count it. By those numbers, the ratio of non-queer deaths equal or outweigh the queer ones. 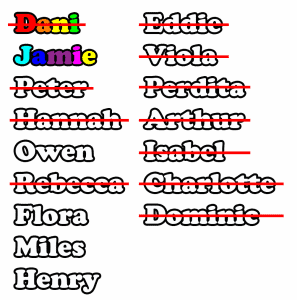 There are a few couples in the show besides Dani and Jamie, such as Hannah and Owen, Peter and Rebecca, and Henry and Charlotte (as well as Charlotte and her husband Dominic). Not a single one of those relationships is intact by the end of the show, so Dani and Jamie are not singled out because they’re queer.

Is Dani considered expendable and/or does she die because she’s queer?

I would argue that she’s not considered expendable. She’s beloved and cared for, and no one wants her to die. She’s also the lead and carries the story. She doesn’t die because she’s queer. None of the deaths in the show are motivated by a person’s sexuality.

Does her death motivate other characters to action or provide shock value?

I would argue no. Dani’s death takes place years later, and there is no story based actions that are motivated because of her death.

Does her death make her a martyr or a symbol?

Technically Dani does die to save her loved ones and to protect others, so on one side, yes, but she certainly doesn’t become a symbol. The only person who even knows that she becomes the Lady of the Lake is Jamie. Dani’s death is quiet and off screen, but it lays the foundation for a safe future for Bly. The death itself is not a spectacle, but the loss of her is felt through Jamie.

Does Dani get to experience a happy queer relationship on screen?

Yes. From episode 4 onwards the progression is slow, with Dani still healing from her grief and then dealing with all the haunting stuff, but it really kicks into gear in the last episode, after Dani binds herself to the Lady of the Lake to save Flora. When I first watched this episode I thought for certain that Dani’s death would come quickly, but it doesn’t. In the later part of the episode we know that Dani and Jamie get to live a life together, full of love, for at least 9 years before the Lady becomes too strong for Dani to deny her any longer. Dani and Jamie live together, travel the world, reunite with old friends, open a flower shop together, and even get as close to married as they can get at that time. 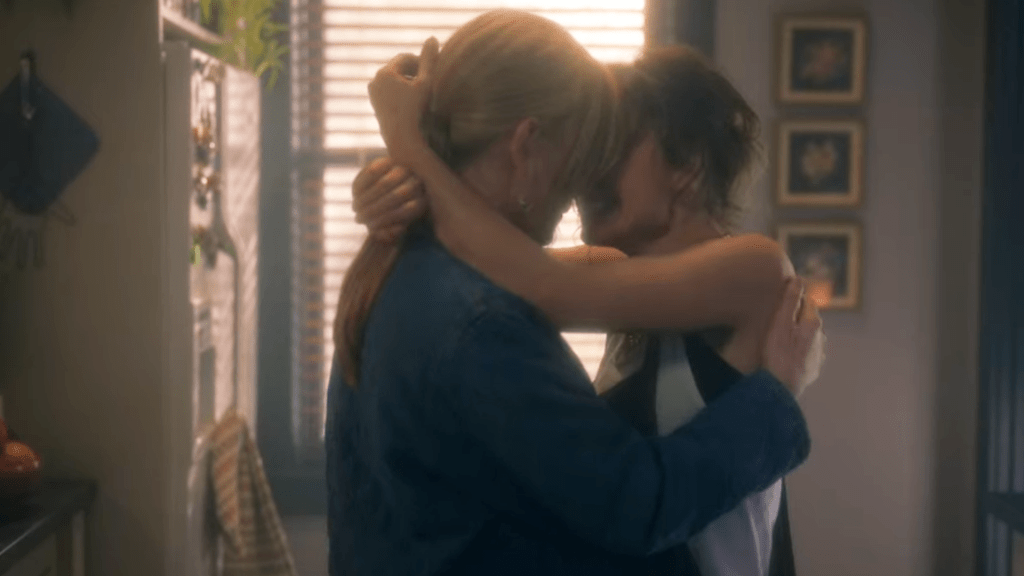 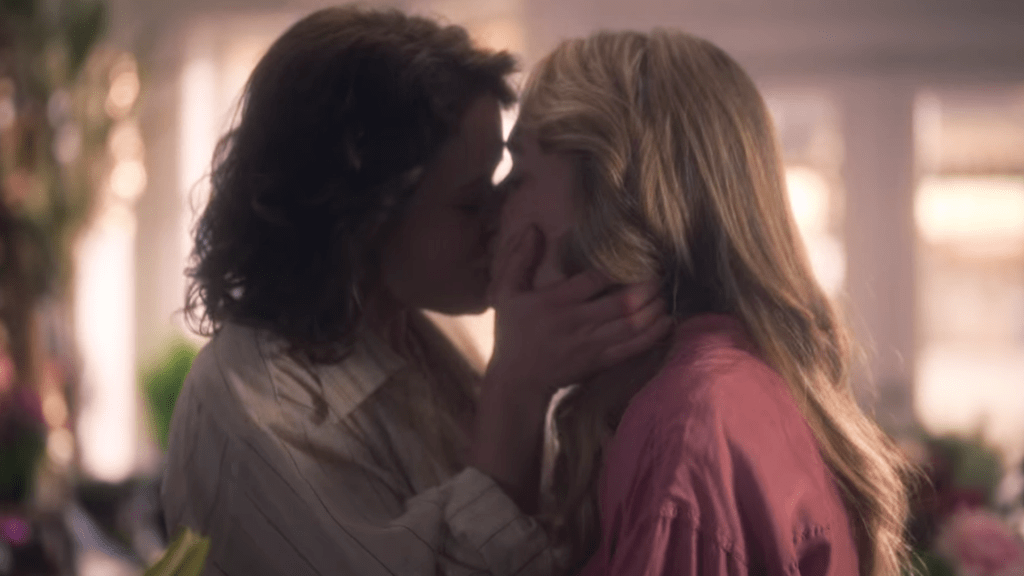 Do the living queer characters experience pain and hardship?

As much as any character would when their loved one dies. When we first meet Jamie she’s telling their story. She’s passed the sharpness of her loss and wants people to remember Dani and their time together. She has never stopped loving Dani, and Dani’s spirit has continued to watch over Jamie since her death. They have never truly been separated even if they cannot be together in a traditional happy ending.

Dani’s final choice is a direct parallel to another couple. Peter and Rebecca in the show have a toxic and terrifying dynamic that culminates in Peter killing Rebecca so that they can be together in death. The Lady of the Lake takes both Peter and Dani in different ways, but their actions towards their romantic partner are opposites. Peter selfishly wants Rebecca to be with him no matter the cost to her, but Dani, even when Jamie begs her to take her too, will not.

Dani and Jamie’s love is beautiful and tragic, and Bly Manor is as much a horror as it is a love story. It is about letting go, and the pain that is brought by the refusal to do so. The entirety of the misery in Bly Manor is brought about by Viola’s (The Lady of the Lake) unwillingness to let go, and it perpetuates through many others, until we get to Dani. She chooses to let go of her own safety to save Flora, to let go of her life to save Jamie and all those who might come to Bly in the future.

So, did Bly bury its gays?

Maybe. I don’t have an answer that fits 100% into yes or no. While I would have loved for Dani to grow old with Jamie and for them to have parted when they were ready, that’s not the story we got. But I don’t feel upset or cheated out of this relationship because they showed us that love, they showed a content life between these characters for years before Dani had to make her final sacrifice. If Dani had been taken by the Lady after her sacrifice to save Flora, then my answer would be yes. But she was taken after nearly a decade of a sweet and healthy relationship so all I can say is maybe.

The story begins with a middle-aged Jamie preparing to tell the story of what happened at Bly. Although we don’t know at the start, it’s the night before Flora’s wedding. In the final episode, they know that Henry never told the children what happened at Bly after it faded from their memories. We see both older Henry and older Owen allow Jamie to progress with telling this story, and I think they know that it’s part of her own grieving process. Even if Flora doesn’t remember, Dani is the reason she’s here, and Jamie needs to talk about it.

Additionally I think it’s important that the show also lets Dani know that her sacrifice wasn’t in vain. Though she doesn’t see Flora again, she does hear through Owen that both children are happy, Flora has a good relationship, her uncle is sober and they’re a happy family. She made her choice to protect that little girl and her knowing that validates that sacrifice.

The story winds down at Flora’s wedding during her first dance. Jamie has been living without Dani, missing her and loving her all this time. I think it’s important for Jamie to see in person what Dani’s sacrifice led to, and for the audience as well. It was never for nothing, or for shock. It was for this. 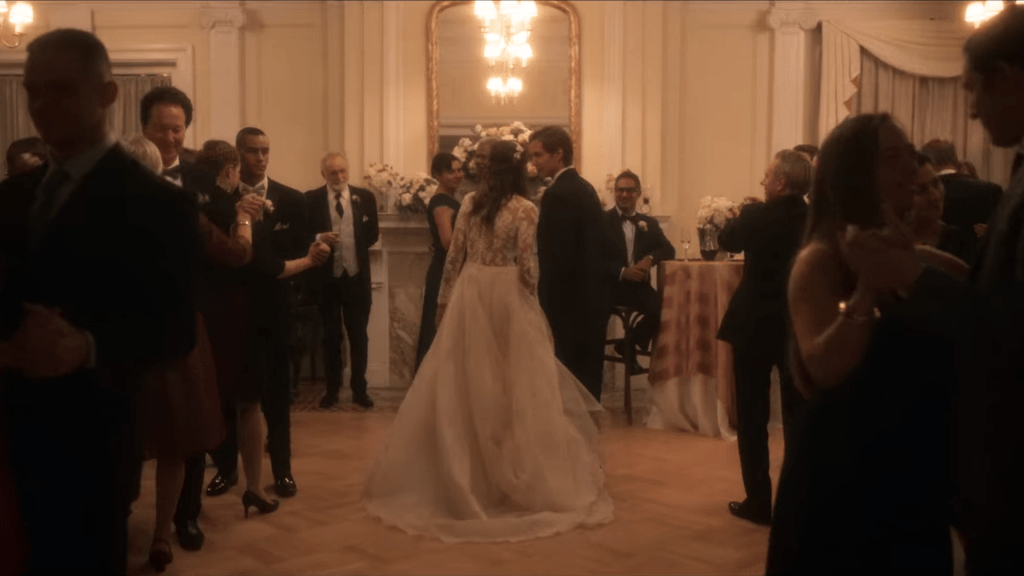 Thank you so much for reading! Have you watched The Haunting of Bly Manor? What did you think? Let me know in the comments.

Check out the video version of this post here: